The Protocol Department’s main functions are:

Chief of the Presidential Protocol 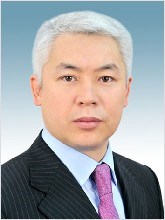 He is the graduate of the Kazakh National Technical University, with a degree in metallurgical engineering, and the Academy of Public Administration under the President of the Republic of Kazakhstan, with a degree in international relations.

Over the years, he worked in non-governmental sector. Madi Atamkulov held various positions in the Ministry of Foreign Affairs of the Republic of Kazakhstan. He was the First Secretary, Head of the Unit, Division, Deputy Chief of Protocol, Chief of the State Protocol Service of the Ministry of Foreign Affairs. He also served as Deputy Chief of Staff of the Senate of Kazakhstan’s Parliament.

He holds the diplomatic rank of the First-class Counsellor.

He is awarded with 3 jubilee medals.